As we move forward, promoting The Gospel of Jesus Christ, expect the blessings to shower your every step! 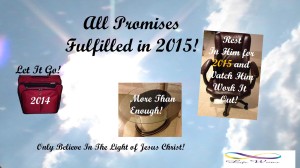 Never Give Up on God Keeping His Word to You! He is not a man that He should lie! Hallelujah!

“Therefore, my dear brothers and sisters, stand firm. Let nothing move you. Always give yourselves fully to the work of the Lord, because you know that your labor in the Lord is not in vain.” (I Corinthians 15:58 NIV)

As we prepare to say goodbye to 2014 and face the challenges of 2015--don’t be moved–tempted to join the masses in thinking there is no hope.

Neither will it matter who holds the majority votes in either the House or the Senate–God is still God–even if some politicians think they are, they’re not.

No matter how negative the media reports every event–they will have to stand before God one day, too and give account for how they reported news and so will their producers–whose biases are represented in the news reports.

No matter how many people are killed by the negligence of gun owners, police, or criminals–God still has the last word–and soon, very soon, all will know that the NRA is not God nor do they represent Godly behavior.

No matter how many people appear to suffer at the hands of dictators and godless leaders–God will wipe the slate clean and all who honor and respect Him, will be vindicated.

No matter who attempts to change the intent of God’s Word to appease the masses for fleshly pleasure–they, too will stand before God and give account of themselves, but before that–they will see firsthand how the wrath of God deals with those who profess to know Him, but live in opposition to His Word.

No matter how many people say we, who Believe are foolish and unlearned–don’t be moved–the same was said of those God used to inspire to write down what He said. Remember this–the fool has said in his heart there is no God and then allowed his lips to utter the same expression. Don’t be moved by their unbelief, God will move them.

No matter what 2015 brings into our lives–stand firm, unmovable, in the faith that we are victorious in all things and no matter what the enemy attempts to do to deter us–we shall not be moved because with God going before us–He is more than the world against us! Hallelujah!