When people have been saved from disasters and they know The Lord, they understand God’s saving grace in situations beyond their control. David knew The Lord and knew that it was The Lord who had saved him from Saul’s relentless pursuit to kill him.

Let’s step back for a second review the relationship between David and Saul. It was David who struck Goliath with a stone from his slingshot. It was David who was able to soothe Saul with his music ability. It was David who was loyal to Saul beyond measure and refused to kill him, even though he had a chance when Saul sought to kill David out of jealousy. The real issue here with Saul was his jealousy, which reigned over logic in his head and led to his destruction. Jealousy–the monstrous emotion resulting from insecurities that blinds people from seeing reality and is a tool of the enemy–Satan.

When Samuel anointed David as the next king over Israel–predictively–David was put on the road to notoriety and acclaim. He was a hero to the people, but a pain to Saul because the people exalted David–because of his military success over Saul, who was king.

How can someone who claims to love a person become their enemy? When a person is influenced by demonic influence, love won’t stand a chance if the person who is influenced would rather express their desire to hold onto negativity.

Instead of taking the opportunities to kill Saul and become King as prophesied, David ran, formed his own armies, still fighting on the side of Saul’s reign, but keeping far away from him. Throughout Saul’s pursuit of David, David’s faith in God did not fail and he knew he would be saved. When Saul was killed, David sang praises unto The Lord. In fact, during the pursuit, David wrote and sang many songs and we have access to some of them in the Psalms.

Now, the bigger question for us today is, when we are pursued by an enemy, do we sing praises unto our God or do we cringe in fear and hopelessness? Do we sing when we know we have been delivered and saved by that enemy that influences our fear and makes us feel abandoned?

I’ve learned to sing God’s praises, no matter what is happening in my life. I may take a moment to be sad, but I straighten my back, hold up my head, and bellow the songs that are deeply embedded in my spirit--knowing that God has the last word over the things that happen in my life and I know–through Him, I will be victorious in the end. Hallelujah! Thank You, Jesus for victory in every situation in my life–no matter how dark the night may be, morning is coming and with it–Sonshine (The Son will shine brightly and dissolve any despair in all types of weather) and new mercies! Glory to God! I am saved from my enemies!

It has been said through various mediums (scientific studies, documentaries, etc.) that homosexuality is genetically determined before one is ever born. And because they were born this way, they claim their sexual orientation should be treated like any other birth defect or handicap. This theory is inconsistent with The Word of God. God never states that a birth defect or other anomaly or handicap is sin. He specifically states that the act of either men laying with men as they would a woman or women laying with women as they would men (homosexuality) is an abomination and those who practice it will not enter into heaven.

Let’s look at things another way. None of us are born gay or straight—we are born male or female (with a few exceptions pertaining to those born with both genitalia as a result of hormonal imbalances during gestational development). Babies do not lie in a hospital nursery right after they’re born with any conclusions about themselves. They are incapable of making any choices at that point. We choose what we do—and that becomes our sexual orientation—our actions which is why—some profess to be born—bi-sexual—they like having things their way—any way they can. Having an attraction towards someone of the same sex does not determine a person is gay. It is acting upon the attraction that puts one on the path of destruction and being labelled gay. Every one of us—chooses our actions.

We can be tempted to steal from a pile of money sitting in front of us for hours on end. We don’t become a thief until we actually steal some of the money. While this is a rather simplistic analogy, the premise is true for any situation. We do not become something until we act upon our desires.

And if God in His infinite wisdom, truly allowed someone to be born gay—surely, this is justification for them to become “born-again” and live the life God intended them to live, receiving all of His many benefits. This is why Jesus told Nicodemus that we must be “born again” in order to enter into heaven. (John 3:5 paraphrased).

It’s Not Normal And God Said It First  available on amazon. com 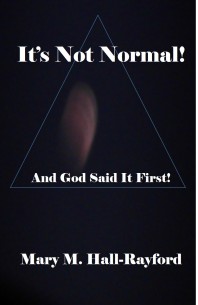