Not to us, Lord, not to us but to your name be the glory because of your love and faithfulness. Why do the nations say, “Where is their God?” Our God is in heaven; he does whatever pleases him, but their idols are silver and gold, made by human hands. They have mouths, but cannot speak, eyes, but cannot see. They have ears, but cannot hear, noses, but cannot smell. They have hands, but cannot feel, feet but cannot walk, nor can they utter a sound with their throats. Those who make them will be like them, and so will all who trust in them. Psalm 115: 1-8 NIV

Those who praise people more than God and give people greater esteem than they do God, are idolizing the creation, rather than the Creator.

I’m reminded of trump in this passage–he has a mouth that never speaks truth, eyes that cannot see reality through his delusional alternative universe, ears that block out sound, wise advice; he has feet but cannot walk the path of integrity because of his crooked ways, and he utters sounds that are incomprehensible and astounds the world at his mental incompetence and ineptness.

We are in the throes of the beginning of a national crisis because we have allowed an idiot–that very foolish, stupid person–to make decisions for all when they do not have the mental capacity or expertise to do so. He relies upon those who hate and promote false news and lies to give him advice–though he claims to work for the people who voted for him. Here’s the problem–the people who voted for him were only a fraction of the total population and some of them are now seeing the error of their vote.

But trump is really not the problem right now–unless we allow him to continue to be one. The real problem is the complacent and impotent GOP Congress. They have a job to do–upholding their oath of office and they are negligent in doing their job. Pressure has to be brought upon them to honor their oaths of office over any pledges of loyalty to a person. Patriotism does not mean standing by a president; it means doing all one can to preserve the nation–placing priority to country over political party. They need to be reminded over and over again, until they do their job. 202-224-3121 is the Congressional Switchboard number–start calling now.

If they fail to do their job, we can rest assured of continued destruction and erosion of what we once understood a democracy to be. Putin gets his wish and takes over America without firing a shot–all because of an idiot who allowed himself to be put in a position where others have leverage over him. And the collusion–is real and dangerous since it involves the exposure of all in the GOP who have been complicit in the disastrous 2016 election results. They knew then and know now, the price of winning a rigged election will cost them their political careers. They have been duped, willingly.

What do we do now? We call, we email, we fax, we tweet until we get tired, then we rest and start all over–letting Congress know what we think of them and how they should do their jobs. I’m planning to contact at least 20 a day–by one means or another until they take notice and rethink their positions which are all on the line. The other 261 million people will vote for integrity in 2018 and in 2020–removing them from their positions.

I, among many others, will be seeking the opportunity to truly serve all Americans and I know–if Everyday Americans are fed up with the nonsense we see on a daily basis, they will appreciate having someone who understands the challenges they face, making decisions in the White House for all Americans.  Only time will tell if Americans will wake from their daze and see truth and love as a means to accomplish greatness rather than lies and hate. It is up to us, all Americans who care about this planet, to rise and change the narrative so we’ll have a bright future. 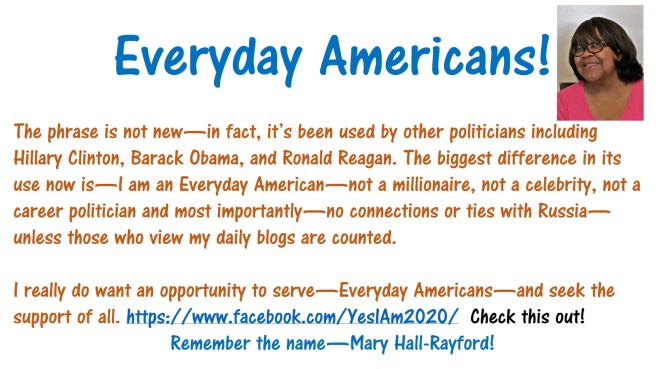