As a citizen in this already great country, I find it incumbent upon me to remind you of your obligations and responsibilities for all Americans since you chose to run for the office you currently have.

Most people think politics is a dirty business and want no part of it. I’m sure in the beginning of your political career you probably thought the same thing, but you were determined to make a real difference in what happens in this country and to make lives better for all. Unfortunately, you like so many others before you, have forgotten about the importance of people and have instead become inured to the plight of the poor and working class in order to keep your position by caving to those with money. “The lust of money (will do anything to get it) is the root of all evil.” And it appears that particular passage of scripture (from most bibles) is true. Greed and the need to satiate a desire for power has been a disruptive factor for many in Congress. I hope this does not describe you, but if it does, it’s time to make a change.

Most Americans realize by now that had it not been for the interference by Russia in 2016 election that many of those in Congress and certainly the person in the White House would not be there. We know you knew about the cheating and it’s time you’re held accountable. Since truth and integrity were not part of the plan to get what you wanted from the beginning, we don’t really expect truth and integrity to find its way back into your lives, but we can hope. While we’re waiting, we’re demanding that you exercise the Constitutional right of oversight of the White House before there won’t be any of us left.

Unless you are totally blind and deaf and ignorant, lacking the mental capacity to see that greed and corruption are what brought us to this place, you know it’s time to remove Donald J. Trump from the Oval Office and Mike Pence who is complicit in the knowledge that greed was the motivator and criminality the end results. We do not need criminals or those who are criminal-minded to be in positions of authority in America. And we certainly don’t need a dictator-wanna-be demanding loyalty from others, seeking praise and attention to appease his insecurities.

The continued existence of our democracy is up to you. Everything that happens–all the bloodshed and deaths–are on your hands. You are responsible. If you no longer have a conscience, you will still stand before God and be judged for all you’ve done–good and bad. If you plan to hear, “well done,” I suggest you do well and govern for the sake of all the people and not just for the Koch Brothers, the Mercers and Murdochs of this world and certainly not for the Russians or the money they give to keep their plan going–to destroy democracy. If you have family, you should care about how the history books will note this passage of your life.

Thank you for being a true, patriotic American in responding the needs of the people and just remember, compromise is not a bad word and neither is bipartisanship if we want to keep America moving forward and not sliding backwards. 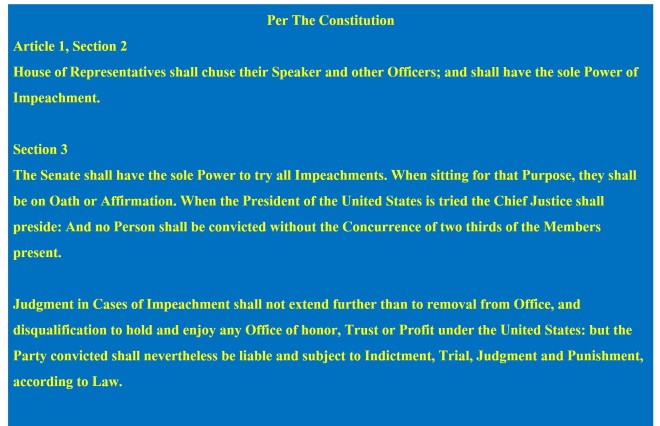 It is written: “ ‘As surely as I live,’ says the Lord, ‘every knee will bow before me; every tongue will acknowledge God.’ So then, each of us will give an account of ourselves to God. (Romans 14:11,12 NIV)

The time is coming and very quickly when we will see God’s Word–front and center–alive and blazing brightly so everyone will see and know–He lives! And whether a person has lived their life in belief or unbelief, they shall bow before The King of Kings and acknowledge Him as such.

For those of us who know this–our lives should proclaim this truth–on a daily basis so all who know us will have opportunity to see God’s Word in action. And when He returns, none will have an excuse for not believing Him.

As it is now–we know by listening to the media reports–many do not believe Him and certainly have not given Him Lordship over their lives. It is sickening to see how people have so little value for not only their lives, but for the lives of others. In one week, how many times do we have to hear about gun violence and people being killed? How many times must we see car thieves kill innocent people when they attempt to “run away” from the police?

In particular, two children–on a sidewalk–were killed yesterday when the driver of a stolen car, running from the police plowed into them. That wasn’t enough–they kept going and injured three more children and an adult before crashing. The driver attempted to run, but was caught.

If the person driving the car had not stolen it, there would have been no need for police involvement. Had they had any respect for life–they would not have plowed into innocent children. THE POLICE DID NOT KILL THOSE CHILDREN! THE IDIOTIC DRIVER KILLED THOSE CHILDREN AND THE BLAME–WITH ALL FINGERS POINTED IN HIS DIRECTION–IS HIS!

This is not necessarily a popular position to take–especially in life of all the police abuse of others as we have recently seen, but let’s get real. Honestly, every time a person commits an act that requires police involvement–they are to blame, not the police. Let’s stop pointing the fingers at the police and change the culture in which we live where young people (and older people, too) think they have a right to help themselves to the property of others, trespass on the property of others, and do whatever they want–without regard for the rights of others.

If all we do is point fingers at those we think are the problem, we’re not solving any problems. Parents must be better parents in teaching their children right from wrong and holding them accountable for what they do. We need laws that are enforceable and court systems that are more interested in justice being served than serving their political agendas.

What we need is for people to believe God now and live like they believe Him! Then and only then, will we see an end to senseless violence and the loss of innocent lives.  We shall all give an account to God for what we have or have not done, so let’s get this living on earth, right!