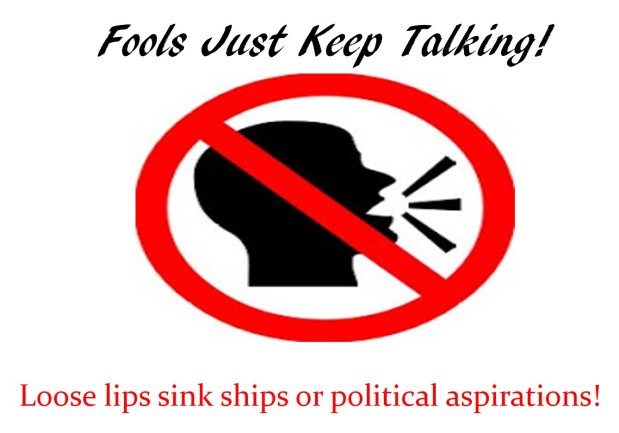 And you yourself must be an example to them by doing good works of every kind. Let everything you do reflect the integrity and seriousness of your teaching. Teach the truth so that your teaching can’t be criticized. Then those who oppose us will be ashamed and have nothing bad to say about us. For the grace of God has been revealed, bringing salvation to all people. And we are instructed to turn from godless living and sinful pleasures. We should live in this evil world with wisdom, righteousness, and devotion to God,while we look forward with hope to that wonderful day when the glory of our great God and Savior, Jesus Christ, will be revealed. Titus 2:7,8, 11-13 NLT

At what point–in this election cycle–are people going to admit that Donald Trump would not make a good presentative of who Americans are?

Though I have tried to refrain from giving him attention, his actions–cannot be ignored. This is not about hatred or bigotry or incompetence–it is about the fact that this man has no apparent moral compass and even with his lame attempt to apologize, sincerity is seriously lacking and the fact that he attempts to deflect and dodge–turning the blame onto Bill Clinton.

Bill Clinton acted foolishly and immorally before he was voted as President and afterwards and he was punished for his actions. And no matter what Hillary did–as the woman wronged in the situation–the women who chose to involve themselves with her husband cannot justify their actions and in no way should anyone attempt to hold Hillary accountable for what her husband–who is not seeking the presidency–did. In fact, I don’t know too many women who wouldn’t have done the same thing Hillary did–letting those women know, she wasn’t a doormat. The repeated lies that Bill abused women should stop and I pray that God will deal with those who originated the lie. Those women knew he was married and many of them plotted to get next to him in order to undermine his position.

I am so tired of the deflection and dodge game continually presented by the Republican party surrogates that I am beginning to doubt their relationship with God.

How can anyone–purporting to be a true Believer–continue to justify and gloss over Trump’s behavior by blaming others?

Trump has repeatedly shown the world that his inflated ego will not allow him to seriously admit wrongdoing and truly be contrite with his abject apologies. His combative attitude is not lost to those who are watching what he does with clear vision–our minds are not blinded by party loyalty, but we see truth–in all of its glaring glory–and the man is not fit to be president of the United States.

Where there is no integrity–evil lurks–ready to spread its poisonous venom onto all who get in the path. And anyone who continues to justify the evil is just as evil as the evil itself.

Do I believe he is irredeemable? I don’t know; only God knows. Do I believe–as some evangelicals are promoting–that God chose Trump? NO! For anyone to believe that lie–especially someone claiming to be a Christian–either doesn’t truly know God through His Word and in Relationship with Him or they think God is a moron. Heaven help us all!

Until integrity and truth reign in the hearts of man and woman–we will continue to see this debacle–total exposure–for all the world to see and then wonder–“What’s wrong with those Americans?”

This American understands the problem and I have more questions than answers, but I will not sit idly by and say nothing about the danger that lurks if America puts this man in the White House. He claims, traveling around the country has changed him, but we see no evidence of that when he continues to mock the disabled, continues to belittle minorities and women, and has no problem backpedaling faster than a spinning top spins. Someone truly needs to explain to him, “the art of sincerity” and “how to avoid deflection and dodge ball” when running for the highest office in the land.

If ever we needed the wisdom of God to pour out on the planet, that time is now.

Lord, show us who You are in a very public way, redeeming the time for those of us who Love You and will not bring shame upon ourselves or You.