The allegations of sexual assault and subsequent hearings conducted this week have set the entire country on edge and everyone has an opinion about who’s the most credible.

I watched Dr. Christine Blasey Ford provide her testimony with tears running down my face because my heart was moved and my mind triggered about the abuse I had also suffered at the hands of despicable human beings. I’ve related my story a number of times so I won’t bother to repeat what’s already been said, but as I listened to Brett Kavanaugh and recognized the lies behind the belligerence, rudeness and total disregard for the positions of the senators, I began thinking, “how did we get here?”

After talking to my husband and remembering the attitude of our society from the beginning of time, I realized that men have never considered women their equal and they have always felt it was their right to treat women anyway they wanted to and the women were supposed to shut up and take it. We’re not going to be silenced and we’re not taking it any more. This upcoming election will be the proof of that.

But just to review–the ugliness of our history–let’s start with the way men didn’t think we couldn’t own a house, have credit cards, have good paying jobs, had sense enough to know how to vote and a couple million other things. Women have been raped for centuries and had no recourse because the men–in law enforcement and in the courts and on juries, didn’t believe them. Getting tired of not being believed, a lot of women simply stopped reporting the assaults. The #MeToo movement–in more recent times–has empowered many people–men and women–to step up and speak out about sexual abuse and bravely named their assailant. And still, not all women are being believed as we saw in the recent testimony from Dr. Ford.

What has fascinated many people is the number of men who have come forward and told their stories about being molested and raped by other men and in some cases–women. Why on earth are we as a society of supposedly civilized human beings still in a place where a person’s body is not respected and some don’t understand that, “no means no.” This only applies to adults who are capable of saying no, but it certainly does not apply to children who are intimidated and bullied into keeping silent. Aren’t we better than this? Is one person’s sexual insecurities worth ruining lives of others?

Rape–is not a sexual act–it is an act of violence, perpetuated against people against their will and usually at the point of a threat. These angry, vicious, insecure people who think their manhood hangs between their legs need serious counseling because raping others, doesn’t make them me–it makes them cowards of the worst degree–especially those who abuse children.

We can and we must change our tactics and start believing children and women when they come forth and speak out about sexual abuse and molestation. We must believe and support all who tell their stories and make sure they know–they are valued and worthy of our belief in them and our trust not to judge them wrongly for things they had no control over (and we’ve done that, too).

We can start changing the course of events with the upcoming election on 11/6/18. We can AUTHORIZE AND EMPOWER WOMEN to write legislation that provides more protections and remedies for those who have been assaulted. On a personal note, I’d like to see at least two bills written and made laws: Any time a man is convicted of rape, he should be castrated. Any time a man refuses to pay child support, he should sterilized. If this sounds vindictive and vengeful–you don’t know my story.

As a reminder for some who may have forgotten what I’ve written in the past about my story, I’m including a letter to Brett Kavanaugh and tweeted to most of the GOP senators who seem either not to understand the predicament Dr. Ford described or care.

Sexual assault is not a partisan issue it is a cancer and stain on our society and we must eradicate it. That may only occur with electing the right people, getting rid of the wrong people, and learning to see ourselves as better people. 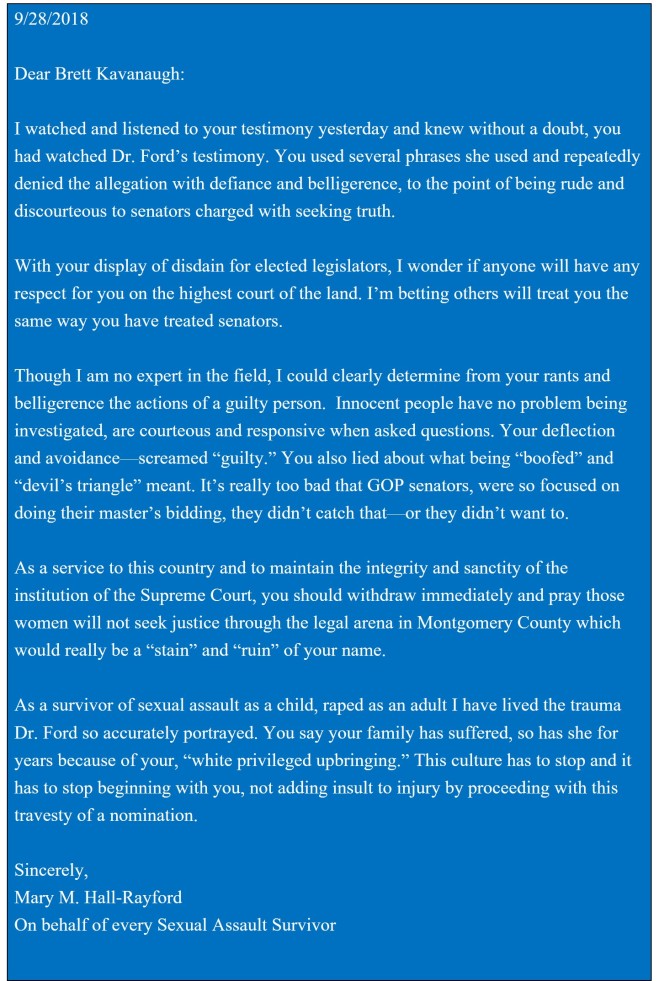 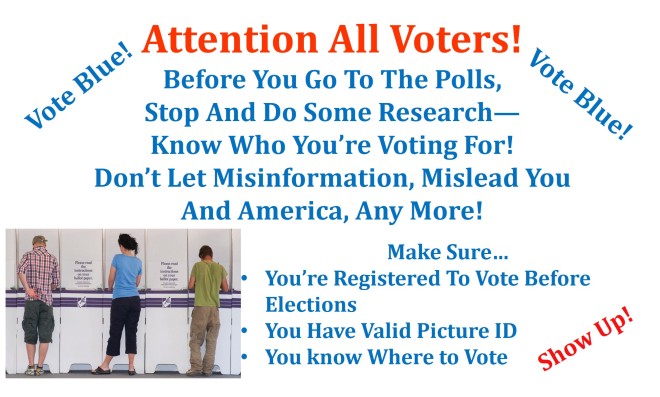 Women of America–now is the time for us to have a say over what happens to us–our access to appropriate medical care and to the laws of the lands.

This is just the beginning of my journey–I’m on a mission to make life better for all, but especially children and women. Are you with me?

At some point, we have to go beyond #MeToo and ask the question, “who else?”