“Judge not according to the appearance, but judge righteous judgment.” John 7:24 KJV

The NIV version states, “Stop judging by mere appearances, but instead judge correctly.”

In order to understand what He was referencing, we must know to whom He was speaking and why. If we read (with understanding) the verses “before” this one, we know that it is the religious leaders of that time who were seeking Him to kill Him because they did not understand who He was.

Jesus answered, “My teaching is not my own. It comes from the one who sent me. (John 7:16)
This is His response who wondered how He could know so much when He was taught in the Jewish synagogues.

Anyone who chooses to do the will of God will find out whether my teaching comes from God or whether I speak on my own. John 7:17

Here, He lets them know they can choose to examine the scrolls used for teaching and determine whether He was saying what God said or whether He was speaking on His own. Jesus never said anything that His Father had not said, because He is God, the Son. Why would He oppose Himself? This is part of the mantra and rhetoric used by those who “want to believe in half of the Bible, but not all of it.”

In order to get a right understanding of Scriptures–we have to study them and know why things were being said and to whom and when it was said. When some “cherry-pick” what they choose to quote, they are misleading others and of course, we who know God’s Word, know that it is a trick of the devil to deceive. Remember this–a half-truth is a whole lie as far as God is concerned. When we know God, we know we cannot selectively choose which parts of His Word to believe and which to ignore.

Wherever Jesus went while He was preaching, He addressed the situation confronting Him and He related His teaching to the people on a level they could understand.

Whoever speaks on their own does so to gain personal glory, but he who seeks the glory of the one who sent him is a man of truth; there is nothing false about him. Has not Moses given you the law? Yet not one of you keeps the law. Why are you trying to kill me?” “You are demon-possessed,” the crowd answered. “Who is trying to kill you?” Jesus said to them, “I did one miracle, and you are all amazed.Yet, because Moses gave you circumcision (though actually it did not come from Moses, but from the patriarchs), you circumcise a boy on the Sabbath. Now if a boy can be circumcised on the Sabbath so that the law of Moses may not be broken, why are you angry with me for healing a man’s whole body on the Sabbath? John 7:18-23

Now this is the conversation Jesus had with the Jewish leaders BEFORE He said, don’t judge. From all who recorded what He said, in Matthew, Luke, and Mark–The intent of His conversation, never changes God’s Word.

As I’ve said before, Jesus said a lot more than, “don’t judge,” or just for people to “love.” He also preached about sin, hypocrites, lying, fornicators, murderers, and much more. More than anything, He talked about the need for Him to be here and how a person can be saved and the benefits of salvation. He prayed for us (who Believe) in the Garden of Gethsemane before His arrest and it was His love for us, that kept Him from coming down off that cross. His bloodshed on the cross was for those who “choose” to Believe Him as the Son, and God the Father and obey His Word. 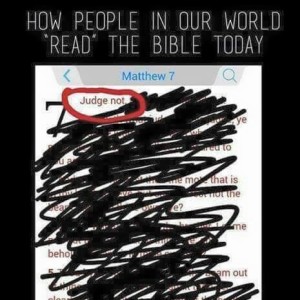 More of what Jesus said coming in the next week or two on a daily basis. We need to know so we can counter Satan’s lies.