This remarkably small band (20 members) consistently earns Division 1 rankings for their half-time field performances. One of the reasons they are so remarkable is because of the intense training and practice they get at band camp every summer.

Unfortunately, some of our band families are not able to financially support an eligible student’s participation and so we find ourselves in a predicament where we are seeking the help of the public. Would you consider a $10 donation to help keep our marching band marching? 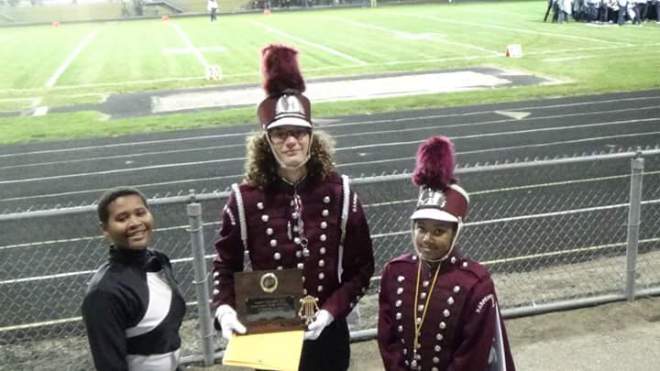 Thank you for considering this tax deductible donation for our students. https://www.gofundme.com/hwpioneers

“Every Day I will praise You and extol Your name for ever and ever. Great is the Lord and most worthy of praise; His greatness no one can fathom.  For The Lord takes delight in His people; He crowns the humble with victory.” (Psalm 145:2,3; 149:4 NIV)

This morning as I write, tired but rejoicing–over the victory won by our 18-member High School Marching Band, I have reason to praise The Lord, as do they all.

If people don’t understand how important it is to recognize that all of God’s Word is relevant to our every day lives, it is because they do not understand it or how marvelous our God is!

We have been steadily encouraging our diminishing band to think and work as hard as they can. Many were discouraged because of the small size, but one of the things I have constantly said to them is that it is not about the numbers, but the individual effort. Last night, their collective individual efforts earned them a Division 1 Ranking during the 2015 Band Festival of Marching Bands. Our senior drum major was so shocked, his mouth fell open (his story), but I remained confident in the blessing of our Lord–honoring their effort because they played and thrilled the crowd with a dance coordinated by the band director. They were awesome.

Since I was the one videotaping their performance, I must apologize for the shaky start of the video; I was trying to manipulate the camera around other people.

Though they are small number they are mighty in sound and courage in facing-off with other bands much, much larger than they are. God’s grace and mercy abounds and prayers were answered–our band members are no longer discouraged, but encouraged.

We must remember that Gideon had his mighty army reduced to a handful so the army would not get the glory, but God. And considering everything this little high school marching band has endured, God indeed gets the glory for their accomplishment.

I pray that each of them will continue to do their very best–individually and collectively–not concerned with the numbers or the naysayers and doubters, but mindful of a God who is more than enough and it is He who gives us the victory in all situations.

Whenever we face obstacles, challenges, naysayers and doubters–all those who would attempt to discourage us and keep us defeated; we need to remember that there is no battle too hard for God and no victory withheld from those who love Him–whether in a marching band or marching through this journey called life. As long as we march to the beat of His Word and live according to the rhythm of His grace–we will know victory and for that–WE GIVE HIM PRAISE!