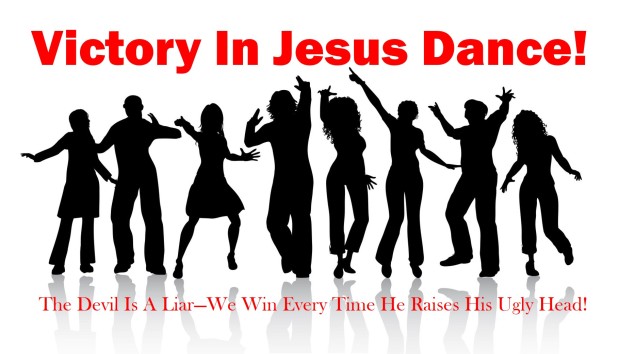 All the men of Judah, with their wives and children and little ones, stood there before the LORD.Then the Spirit of the LORD came on Jahaziel son of Zechariah, the son of Benaiah, the son of Jeiel, the son of Mattaniah, a Levite and descendant of Asaph, as he stood in the assembly. He said: “Listen, King Jehoshaphat and all who live in Judah and Jerusalem! This is what the LORD says to you: ‘Do not be afraid or discouraged because of this vast army. For the battle is not yours, but God’s. 2 Chronicles 20:13-15 NIV

When we get weary, physically and spiritually of being battle-worn in the fight against the enemy’s tactics, we must remember–this is not our fight–but God’s. And with Him going before us (daily as we live), He is more than enough.

Every time the enemy raises his ugly head, we should gather our families and friends and go before The Lord–petitioning Him, communicating with Him our concerns and then we simply let Him fight our battles. The only thing we need to do is stand firm on His Word and obey.

Remember Gideon–whose army was diminished in size, but won the battle.

Remember Joshua–who out of obedience saw the wall of Jericho come down.

Remember Moses–in the desert and crossing the Red Sea on dry land–not one person lost, except Pharaoh and his army who pursued God’s own.

Are we not God’s own? Can we not expect Him to do the same for us that He has done before for those of yesteryear? Can we not communicate with Him our needs and trust Him to win our battles?

Some of us have various battles that we fight on a daily basis–some physical, some spiritual, and some emotional. God knows and He cares and He’s just waiting for us to give it all to Him so we can know victory in Jesus.

A straying spouse–victory in Jesus.

Sickness and disease–victory in Jesus.

Warring factions in social media over this election–victory in Jesus.

Everything, not just some things, but everything will be as God planned it.

Remember–the real enemy is not the people we see and talk to or chat with on a regular basis, but it is a spiritual enemy–one who has already been defeated, on the cross.

Rise up and know that whatever battle is facing you today, it’s not yours to fight, but The Lord’s. We win!

For you make me glad by your deeds, LORD; I sing for joy at what your hands have done. How great are your works, LORD, how profound your thoughts! Senseless people do not know, fools do not understand, that though the wicked spring up like grass and all evildoers flourish, they will be destroyed forever. But you, LORD, are forever exalted. Psalm 92:4-8 NIV

How many times must we be told that fools lack understanding of most things because they are so wise in their own sight, they won’t listen to wise instruction?

Even if it looks like the foolish are progressing in their ways, we don’t have to concern ourselves–they are being set up by the enemy who has influenced them to fall because they have not realized that the devil doesn’t care about people–even those who follow his leading. When the captain only thinks of himself, others have no value to him, but then–that’s a poor foolish captain. And the devil is a foolish captain. He has yet to realize he has been defeated and will stay defeated until that time arrives when he spends eternity in the lake of fire–along with all those who refused to listen to wise instruction.

Those of us who know The Lord and His Word understand that if God acknowledges the works of Satan because He created him, then we should be wise enough to heed The Word and recognize when he is at work. “Submit to God, resist the devil and he will flee!”

All the unrest, instability in nations, the hatred, the bigotry, all of it–are a result of the enemy’s influence in the mind and hearts of people who refuse to repent and acknowledge God. But no matter how many evildoers arise, they shall be cut down and stomped on and cast aside, making room for those who understand peace and love. For The Lord reigns forever in the hearts of all who love Him and we will be victorious in Jesus!

Will the prating fool–the one always running his/her mouth, boasting of themselves, bullying others and spouting empty threats ever understand that all the world, sees them as a fool with no wisdom and no value?

It is better to be quiet and be thought a fool than to open one’s mouth and be known a fool! Will the fool understand this?

“Blessed are those who are persecuted because of righteousness, for theirs is the kingdom of heaven. Blessed are you when people insult you, persecute you and falsely say all kinds of evil against you because of me. Rejoice and be glad, because great is your reward in heaven, for in the same way they persecuted the prophets who were before you.” (Matthew 5:10-12 NIV)

If there was ever a time many believers needed affirmation to stand on their faith in God while saying what He says, this is it. This is a reminder from Jesus that when we choose to live a Godly life–in obedience to God’s Word–that some will insult, belittle, persecute, and demean our faith with their insults, but rejoice! If the insults are a result of stance in our faith, we are blessed!

What we have to realize in our daily walk with Christ is that the enemy rises up at every turn–influencing the thoughts of those who refuse to submit to God and they are in attack mode–especially when we say what God says about sin. Satan doesn’t want us to influence anyone in his army to stop living in sin so he uses those in his army to attack those of us are bold and courageous–saying what God says–and refusing to budge in our position--not caving to the misnomer of being “politically correct” in our conversations about sin.

Who came up with the notion or concept of being “politically correct?” A soldier in the army of evil will do anything to manipulate and deceive people under the guise of inclusion and half-truths. Well–a half-truth is a whole lie and we all know how politicians lie and deceive to get what they want. So, the term–politically correct–is actually an oxymoron since politicians are seldom correct about much of anything in their quest to accomplish their personal agendas.

How does a personal agenda benefit the masses? It doesn’t. It is personal–designed for an individual’s achievement and seldom has any benefit for anyone other than the one who uses, abuses, and lies their way to a political appointment.

But for those of us who know the truth and that nothing is ever correct about saying sin is right in any form, know that when we are insulted by others, we are blessed by God. I don’t know about you, but I’d rather have God’s blessings than the approval of the masses who have neither heaven or hell for me.

Be bold and very courageous in your faith stance and preach The Word, in season and out of season, whether people want to hear it or not–say what God says about everything. If there are those who will not receive what you have to say–shake the dust from your feet, smile, thank them and keep it moving.

We are not responsible for people receiving what we have to say, but we are held accountable for whether or not we say what God says. Say what He says in spite of the insults and know you are blessed by God.

When you get weary of the insults and need a reminder of who you are in Christ–check out this book myBook.to/IAMALLTHAT  and stand firm in the love of God, knowing we are all that God says we are.

Just as John wrote to the churches, reminding them of who they are in Christ and His promise of eternal life because the enemy was trying to lead them astray (v.26), so too, do I write. My daily writings are reminders to those who Believe and Know God for themselves and understand that our relationship with Him, is supposed to be an intimate, individual relationship that is binds us together by love.

We cannot claim to know and love one–Jesus or The Father–without loving the other since they are One–in purpose and intent–to provide us eternal life with them.

There is only one reason that I can think of that confuses people about the relationship between Jesus and The Father. Very simply put, misunderstanding or no comprehension of John’s relationship with Jesus to know that what He tells us is God’s Truth and not his own. God is a Spirit–and we who worship must worship Him in spirit and truth. He loves us so much He came down from in the likeness of flesh–called Himself Jesus (He told Mary what to name the baby), lived among men and understood temptation as we know it, yet did not sin. He didn’t cave or give into sin and whenever the devil tried to tempt Him, He stood on The Word of The Father by reminding the devil, “It is written…” Now, I want people to note that when Jesus told the devil that it was written (He said what God said), He wasn’t concerned with chapter and verse, but the content of the chapter and verse.

Sometimes people get so caught up with “quoting” chapter and verse they forget the intent of the content for which they’re quoting. If a person has no understanding of the intent of the content, knowing the chapter and verse where it’s found is pointless. The Word–purpose and intent of the content–should be so engrained in Believers that we can say what God says every time the enemy attempts to say anything to us. We are to be living letters–by our conduct and behavior and treatment of others–as to the intent and purpose of who God called us to be. We are His children–children of the Light, not the darkness, and it’s time we acted like it by saying what Our Father says.

If we say what He says, people will be offended and convicted of sin for that is the purpose of The Word, along with encouraging us to live a life that pleases God. We do not have to trade barbs with either the unbelieving or those who claim to believe, but don’t know The Word. 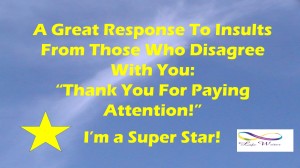