Battlerama Super Tweens To The Rescue is now live on http://www.amazon.com/Mary-M.-Hall-Rayford/e/B00BAW31CQ!  Read and Enjoy!  Don’t forget the review! 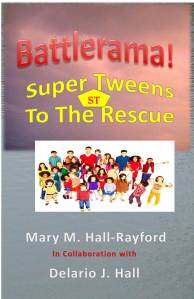 The Wisteria left to seek others.  Their collective reasoning led them to a park in the inner city in Chicago.  Derek was playing basketball with a number of young men who were much older than he was.  They shoved him around and he could seldom get his hands on the ball, but when he did, someone always knocked it out of his hands. They laughed at his efforts, but he was determined to get the ball and make a basket.  Finally, one guy slipped on the court and Derek grabbed ball and ran to the other end and threw it.  It made it in.

“That’s what I’m talkin’ ‘bout.  Yeah, how you like that?” he taunted the others.

The minute he said that, the other players boxed him in and shoved him from side to side, laughing at his inability to elude them. An older gentlemen, passing by intervened and Derek was able to escape and run home.  All the way home, he was irritated by what happened and wished he was strong enough to push back hard enough to keep people from pushing him around.

“One of these days,” he muttered. “I’ll be strong enough to take on all of them.”

As he walked into his house, the stench of garbage that he had forgotten to take out assailed him. His mother was sitting in her favorite chair in a bit of a stupor, totally unaware of Derek’s presence or how the house smelled.  Derek looked at the empty bottles on the table and knew that his mother had been at it again.  He took out the garbage, came back into the house and washed his hands before making himself a peanut butter and jelly sandwich.  When he had finished eating, he went into his room, laid down on his bed and stared at the ceiling.  Water formed in the corner of his eyes, but he ignored it.  This was just one more time that his mother had slipped away in her drunken dreamland and he was left to fend for himself.  Silently, he started pounding the bed with his fists, thinking that if he was Superman, he would have enough strength to keep his mother from drinking because he would be able to keep her from buying the alcohol.